As a project Second City; being a combination of a site specific show, a happening and an intervention into a public space (where it is clear that all these terms mingle), represents nothing new among the productions of Vosto5 theatre.
The company presented something similar at the National Boulevard as early as 2010, and again during the 4+4 Days in Motion Festival; then in May 2014 Second City I opened during The Flora Theatre festival in Olomouc. Therefore, this project is already the second (maybe even the third) Second City they have conceived. 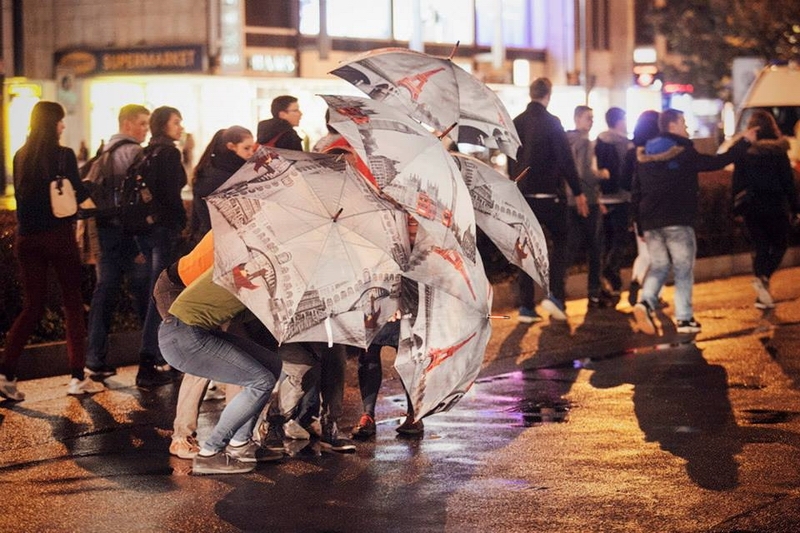 The peculiarity starts with the title. Even if   they have never acknowledged it, inspiration from Michal Ajvaz´s book of the same title in Czech (in English it is called The Other City), published in 1993, can be detected. In the book, the author guides his readers through Prague, where behind the scared walls of both the Old Town and its periphery surreal dramas take place, and absurd rituals are enacted, which can devour and change one’s view of the familiar world once and for all. It does not take much: stumble upon the right book in a second-hand bookshop, open a door at the right (or wrong) time, or simply stop for a moment and observe the hustle and bustle. Suddenly hidden stories start to appear, fragments of accidental conversations make new sense, as if a different, uncommon reality has started to come alive under the surface of the ordinary one.
And that´s exactly how the opening of Second City comes across - the joint project by Vosto5, VerTeDance and students from the Department of Alternative and Puppet Theatre (KALD DAMU), produced by 4+4 Days in Motion Festival. Equipped with headphones and gathered near two huge windows in a former disco on the first floor of Styblo Palace (Palác u Stýblů), spectators see out onto a section of Wenceslas Square, Prague´s central boulevard. They can hear dialogue and music, but apart from a few exceptions, they have no idea who among the people on the street, is a performer and who is just a "regular" passer-by. Those opening fifteen-twenty minutes are the most entertaining and adventurous ones in the whole project. We hear someone asking passers-by for a cigarette, someone else wishing them love and asking them to embrace, but it is practically impossible to orientate oneself quickly in the hustle and bustle of everyday life down there. Not that one minds. The situation forces us to look and see differently. Similarly to Ajvaz´s night wanderer, we too suddenly perceive utterly accidental phenomena as important, and like him we have no idea whether we are seeing two random passers-by or the participants of a (theatre) conspiracy.
But gradually it starts to make sense. Petr Prokop as a Hippie carrying a sack and a flute walks on the street, spreading a message of goodwill. He offers an embrace, in his own way gives blessings and even lends his little flute to someone. He is one of the first to be uncovered, since in ordinariness of Wenceslas Square he stands out. So too does the character of the presenter Pavel Pláteník, known from various shows at Vosto5, traditionally performed by Ondřej Cihlář. Here he holds a camera and on behalf of Czech TV he asks: "Who does Wenceslas Square belong to twenty five years on?"

Easily discovered also (if such a "detective" game were actually being played) would be Tomáš Jeřábek, although as a street sweeper in a typical orange outfit and with his own dustbin he fits into the setting. It is strange that he is the only one of his kind there, which he immediately comments on in his monologue. The least obvious, on the other hand, is the girl asking for a cigarette. Not until later do you connect her voice with the woman in black in a wheelchair (in retrospect I realized it was Halka Třešňáková). Apart from asking for a smoke she also offers palm readings, and sometimes she asks for help to get to the sidewalk with the wheelchair. Personally, I didn’t detect two girls whose conversation I heard several times in my headphones, about stuff in the shop windows of some fashion boutiques.
Director Jiří Havelka manipulates the audience´s attention with a soundboard, deciding what - apart from some continual background music - they can hear in their headphones. During the first half of the show it didn´t    seem to me that he followed any particular script, more likely he was guessing from observing the performers which one was involved in an interesting situation. And apparently, the performers had no idea whether they were "in closeup" or not. For example, Ondřej Cihlář clearly conducted many more interviews than those we heard. I also noticed that when his particularly persistent conversation with some tourists from the Yemen, praising the beauty of Wenceslas Square, Prague and Carlsbad, lasted too long, the director tried to "switch" us elsewhere, only to bring us back to the conversation when he realized the absurdity of such enthusiastic perseverance. However, when Jeřábek and Prokop unexpectedly started a friendly conversation (which was preceded by an effort to have sex if I noticed correctly) we missed several of the opening sentences.
The primarily "dramatic" nature of the opening of the production was now and then interrupted by dance numbers from VerTeDance. These could be quite discreet, like when you  spotted a small synchronized movement of several people down in the street[1]); or could take the form of a musical dance choreography with umbrellas, performed by the dancers with verve and visible enjoyment.
The situation on the square begins to change with the arrival of the "Hare Krishnas". A group of young people in orange outfits comes out of the passage, singing the usual songs and stopping in the middle of the "playing" area. There, they try to make passers-by "happy" and - quite logically - also interact with the Hippie played by Petr Prokop. But suddenly a long white limousine pulls up to the sidewalk. The driver opens the door for several shapely beauties dressed in black, followed by their "caretaker", also dressed in black and wearing dark glasses like "his girls". They approach the "Hare Krishnas", and then both groups occupy the space in silence for awhile. Obviously, a conflict is inevitable and a short verbal exchange ends with the leader of the Hindu agitators invoking "a Celtic force" to enter the dispute on Wenceslas Square. From the former Patent Office opposite several figures in hoods emerge (performers from Vosto5, who have changed in the meantime), carrying light plastic swords and walking slowly towards the conflicting groups. 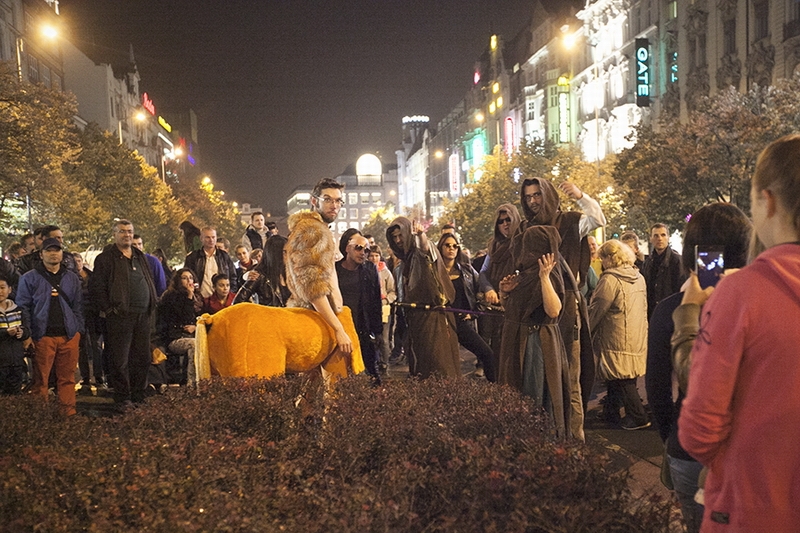 Then a rather static exchange of views follows and we are informed via headphones that "All will be decided in the passage." This is a sign for the audience to move to the view on the first floor overlooking the passage. The dancers from VerTeDance are already in fighting postures downstairs, and are prepared to open the final part of the show with a short combat choreography. Even the performers coming from the street join the dance (passers-by from the square have no access to this part of the show), and for a little while, a kind of a chaotic battle takes place. Somewhat illogically, the noise of the fight in the headphones is suddenly drowned out by a Hussite choral, and then Saint Wenceslas (whose sculpture  dominates the square) on a white horse and in full battle regalia rides into the passage. The battle subsides, all the survivors bow in front of His Majesty, and he rides through the passage with dignity stopping, at the entrance of the Franciscan Garden, beside a modestly dressed young woman holding a baby. He takes the baby from her and rides back to the square. The performance ends.
The arrival of the saint is obviously ironic. But thank God for it, since - at least for me - it was the only justifiable moment in the schematic and somewhat amateurish second half of Second City.
As soon as these evidently pre-prepared actions were presented, the interesting and imaginative play in and with Wenceslas Square turned into an unsurprising and straightforward show taking place at Wenceslas Square. It was as if the overriding need to deliver a message, or the effort to solve something, tied everybody´s hands, which resulted in a partial loss of subtlety and surprise. From the many problems presented in Prague´s main square to only one - the most obvious - was chosen and dealt with.[2])
And so one has to be thankful for Saint Wenceslas and keep recollecting the first half of the production, during which seemingly nothing much was going on, and all efforts to "deliver a message" were unfailingly downplayed by cheerful answers of foreign tourists; including a guileless Russian reaction to an underhand question: „Do you like Putin?“ - „Yes, he´s a really cool dude.“ In the end, that tells us more about reality than the best prepared script can.

Second City, concept and directed by Jiří Havelka and Vosto5, produced by Petr Prokop and Vosto5, co-produced by Vosto5 and 4+4 Days in Motion Festival, Vosto5, VerTeDance and the students of KALD DAMU, premiere October 10, 2014

[1]) Obviously,  80 people with headphones "glued" to two huge windows above the street drew the attention of passers-by, therefore soon there is a group of "audience within  an audience" gathered on the sidewalk.

[2])Personally, I don´t think that the main problems of  Wenceslas  Square are Russian mafia and prostitutes. But I can understand that drug addicts and dealers don´t posses the same symbolic power.