The Golem project of the recent DAMU graduates, Ivo Kristián Kubák and Marie Nováková, which we had the opportunity to see (or in fact to participate in) in September 2013 in a villa on the Prague Štvanice island, became one of the noticeable events of the upcoming autumn. It was accompanied by great reactions from the audience as well as by enthusiastic reviews in all kinds of media. The artists set the piece in the abandoned villa at Štvanice, its' dilapidated beauty and picturesquely gloomy atmosphere corresponds with Meyrink's suggestive descriptions of the Prague Jewish ghetto at the end of the 19th century. The creators describe the form of their project as an “interactive theatrical event created with the use of the method of immersion theatre” and it can be compared to a game of the LARP type.[1]) There is about thirty characters here, whose acting is supervised by approximately seventy spectators. Apart from watching the peripeteias of the central narrative, the spectators can walk through the villa and its surroundings and watch the characters in the moments when they do not take part in the main action. One can also visit several interactive posts that add on to the overall picture of the gradually developing story and loosely refer to Meyrink's book. For me, personally, the most beautiful moment of the evening was the “dialogue” in a tiny room on the second floor of the villa: here, in total privacy, one could (over a perspex mirror) listen to a couple of Hebrew sentences, spoken by the Golem character, stylized as an “eastern” monk dressed in white. This encounter, during which our own face mirrored in that of Golem, materialized the feeling of Meyrink's main character – that of the metaphysical connection with the mythical character (moreover, the mirroring motive is often employed in the novel).
Even though some of the experience was hauntingly charming and the form of the production was entertaining and unconventional, at the end of the evening I was not really as enthusiastic about it. I actually had a feeling that a great idea was a bit wasted. The technical problems were much more visible than in classical theatre productions, and thanks to these the ambitious project was often quite awkward.

The length of the production was particularly unbearable. After three and a half hours walking around the villa and its surroundings, visiting various rooms and waiting for some action, the very form of the production is not enough to hold one's attention. However, the spectator spent three and a half hours in the villa, only if he entered the house exactly at seven o'clock. The first hour was made up of a kind of prologue, during which the spectators were gradually let in in small groups, where one of the characters took charge of them. The newcomers were introduced into the story (the point of view depended on their guide), received a hat (who has it on, is not allowed to speak) and were sent to examine the place. This system was probably supposed to enable the spectators to peacefully investigate the villa and visit the interactive posts without waiting in queues. One could have an appointment at an ophthalmologist's, become a member of the Hillel family or to “have a talk” with Golem, as I mentioned earlier. However, those that were part of the last groups, entered an already full house and from the very beginning – in places, where something of interest was taking place - kept meeting people in hats, with whom they had to share an often quite crowded space.
The question is whether the hour long walk before the beginning of the event as such was really necessary, especially since the evening lacked any kind of rhythm or gradation. To be precise, we could talk about backward gradation – the majority of the action took place in the first hour of the production, the more towards the end, the less of these moments that made up the story line appeared (proportionally, there was a considerable rise in long gaps with no noticeable action). The final scene of the decapitation, which was supposed to be the climax of the whole evening, came out almost unbearably long-winded and what more, it did not even present a decipherable denouement.

Meyrink in each of us, yet still on the outside We see everything as if through the eyes of the main character of the book. He accidentally puts a hat on his head, which used to belong to a man named Athanasius Pernath, and the hat begins to invoke visions somewhere between a dream and pure madness. The hat makes him relive Pernath's fate. We do not know whether these visions are real or whether they are just the figments of Pernath's or the narrator's ill mind. 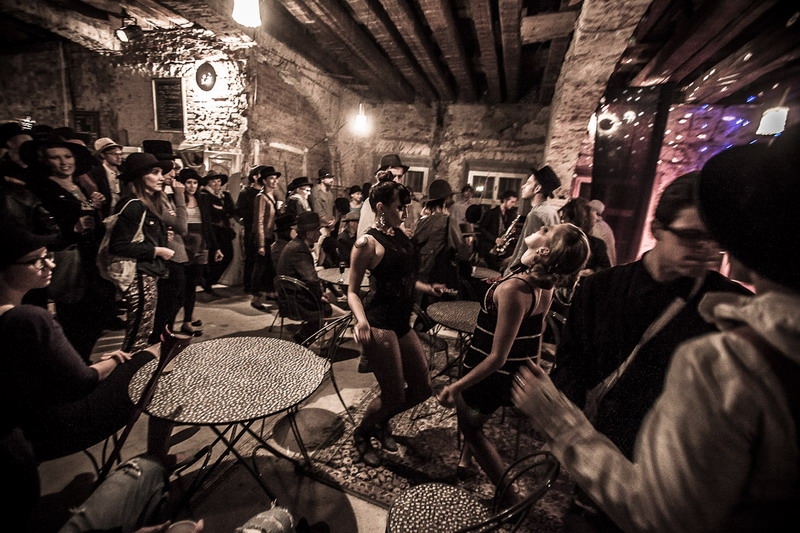 The visual conception of the various settings was maybe the most interesting element of the production, even though here also one could decipher a certain incoherence – some of the places were filled with archaic-like props and reminded one of the poetics of old Prague (e.g. Pernath's room), elsewhere modern objects of uncertain meaning were employed (the hatchery full of numbered eggs). The costumes were similarly inconsistent – Rosina, the fashionably dressed prostitute or Jaromír, the fool, contrast with the dancers in cabaret dresses or Lojzíček in a tailcoat. There is no apparent reason for the heterogeneity of this approach (the work of several stage designers and artists).
The story itself is narrated in a series of scenes, in which the individual characters take part. Apart from the main narrative, each of them plays his role in his “common” setting  (the mysterious Hillel family lives in an apartment on the second floor, the junk dealer Wassertrum in a caravan in the yard, the prostitute at the bar etc.). There is actually only a small number of characters, who really move the story forward, the larger part has only marginal effect on the main narrative. The inhabitants of the ground floor – “Lojzíček's Bar” – are indispensable as atmosphere makers but also because these characters discuss the past events and inform the spectators about them.
However, during the long breaks in the second half most of the actors have nothing to play or discuss anymore. It is most evident in the case of the puppeteers group (in the novel they are the main character's friends, who recognize Golem in the face of a carved puppet). Apart from a short traditional puppet theatre scene they have nothing to do, so they keep company to the dancers at the bar, drink beer and keep waiting just as the spectators. What is worse, we do not get a chance to acquaint ourselves in depth with the important characters of the narrative. Their action is usually not made up of self-contained situations, but of quick flashes: they run past the spectators, shout a few lines and disappear again.
Very often two characters shut themselves in a room and the visitors have no other option than to listen behind the doors. This principle is quite funny (forty people listening behind the doors make for an amusing sight, indeed), yet it is used so often that it begins to bore. Moreover, one has a problem to connect a voice to the right face. The journalist, who moves among the spectators, clarifies the action and provides the necessary connections between the characters and their stories, can try hard as he can to fill in the gaps in the narrative, however, as far as the audience is concerned he talks about names without faces. Compared to this, the incoherence of language (some characters use modern, others archaistic language) and music (sometimes it comes from the cabaret of the beginning of the 20th century, sometimes it is more modern pop music) is a marginal matter. It could have been a “postmodern” intention – same as in the case of the visual aspect of the performance – but it tends to create chaos, because we do not know, in which time and place we find ourselves.

the story of a spiritual journey The performance contains another problem: who is not familiar with Meyrink's text, will probably only gather that we are to do with murder and initiation. In this type of theatre the story is probably not the most important component, and the artists maybe wanted to emphasize the unclear haze of mysticism at the expense of the concrete history of the bestial doctor and the distant murder in the Jewish ghetto that Meyrink tells using the method of a story within a story. 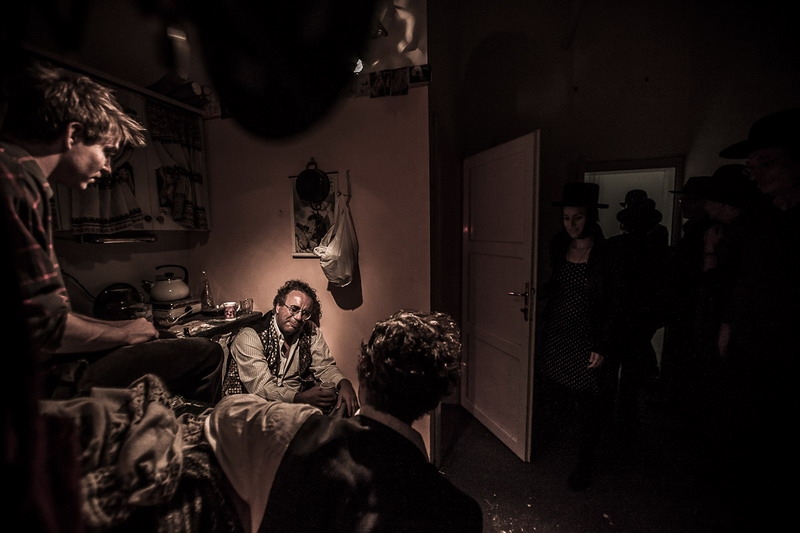 Metaphysical passages, coming from the kabala mystique principles, are no mere textual stuffing or some narrative supplement, but the most important part of the book, containing all the main themes. More specifically we are talking about the relation of man to the spiritual world. The transfer into a series of short, unfinished situations necessarily leads to simplification, several times even disregarding the heart of the matter. The central scene that takes place in front of the house, and in which we see Golem for the first time, dressed in white, is acted out almost without speaking. Thus it is impossible to decipher why Athanasius Pernath (and through his eyes also the narrator/reader) does not accept nor refuse the beans, offered to him by the headless apparition during the initiation ritual, but rather knocks them out of his hand, which means he chooses the “third possibility”, and begins his own journey, seeking the knowledge of spiritual principles.
Many other Meyrink's characters belong in the metaphysical world, however, we might have problems noticing their spirituality (for example, I did not recognize the supernatural abilities of Šemaj and Mirjam Hillel – all I could see was that Mirjam got drunk and smacked somebody with a rag). The problem is also inherent in the method employed, where each spectator puts the story together from his private experiences. The whole production is in fact a cluster of variously developed motives. In spite of a number of good ideas, the “interactive theatrical event” Golem offers rather an attractive wrapping with somewhat diffused content.


[1]) LARP (Life action role playing) games are based on the playing of roles, assigned to the individual players. Each player presents his character with his actions, he or she interacts with the others and tries to complete some tasks, related to a predetermined narrative. The story takes place in a fictive world and usually without an audience; the main purpose is entertainment and the experience of real acting for the participants themselves. The number of participants varies – from several people up to several hundred of them (these huge LARPs often take place in a community of fans of the fantasy genre in the style of battle reconstructions, etc.)