When a little girl on the Baltic coast of East Germany wished to go to remote islands, she was driven by the same desire we knew so well in socialist Central Europe: to get to a place you are not allowed to go. Her idea of the islands, discovered in an atlas, was initially romantic, but gradually it developed into a poetic and scientific interest. She became a cartographer, thus joining both of her interests. In her view, a map is literature, it is a certain kind of poem. The boarders are open now and the adult Judith Schalansky can travel, yet she has added a subtitle to the book she has written about her childhood love of islands: An Atlas of Remote Islands - Fifty Islands I Have Never Set Foot On and Never Will. It is not that surprising that some things are easier to admire from a distance. Generally, an islands is not a paradise on Earth. Moreover, as Schalansky writes in the preface, “On an island, a reign of terror by a despot is more usual than the fulfilment of the utopian ideal of an egalitarian society.” This book, The Atlas of Remote Islands, the winner of the most beautiful German book of the year in 2009, is a wonderful combination of cartography and stories. It mixes scientific reviews with literary fantasy, and, as the author suggests, it also has theatrical potential. Schalansky reminds us that the historical name for an atlas was Theatrum orbis terrarium (theatre of the world) and adds that: “An island is a theatrical space: everything that happens there automatically condenses into stories…” Still, the transformation of her stories into a theatre performance is surprising and unusual.

It is unusual in its double metamorphosis. Firstly, a duo of musicians, Filip Homola and Michal Kořán, known as Kora et le Mechanix, recorded their own compositions based on the theme of nine chosen islands. This band has been around since 2004 and is characterized - according to the theatre programme – by an abstract, experimental ambience.  Ambience signifies environment or surroundings. In this style of music, all the different kinds of sounds that surround us can be music. In the production The Atlas of Remote Islands, it can also be the other way around: in this genre, music can change back into the sounds that surround us: that surround not only us, but also those that surround islands. There are many characteristic sounds evoking gusts of wind, the roaring of waves, the sound of the sea we hear when we dive under water, the sound of birds and the calling of whales. The music doesn’t have dramatic dynamics, its mood is of a cold flow, of a gloomy stability rather than of calmness. Sometimes there is a rhythmical musical section or a soft tune, which appears and repeats a short theme that sounds almost oriental. Sometimes the music bubbles, squeaks, the tone sounds like iron or glass… Only one passage stands out from the flow of the music, i.e. an extract broadcast on an English radio station, in which a corroded male voice instructs a female pilot and the female voice answers.
Only when the recording of the music was finished, did Homola direct this related, minimalist theatre piece. The music for the production differs from the recording not only by omitting the composition about Trinidad (where a UFO was spotted and photographed), but spoken words and new, purely musical numbers have been added to the live performance. The most significant addition is that of an electric guitar made from a piece of wood, possibly a part of a shipwreck washed up by the sea. The guitar, which even has its own small solo part, sounds like a chain saw thanks to wires stuck between the strings. At the same time, a half-naked actor beats his body, which creates a sharp sound amplified by the microphones glued to his skin – which is musically similar to cymbals, and metaphorically evokes a harpoon thrust into a body. It is about the killing of whales. Words intercept the music usually at a soft, dreamlike tempo; the gestures of the six reciting voices are similarly smooth (Miroslava Bělohlávková, Diana Čičmanová, Dan Kranich, Adam Kubišta, Barbora Kubátová, and Michaela Homolová). However, words themselves can also be music, for example, in a two-voiced recitation the second speaker lags a little bit behind the first one and the harmonised recitation resembles the sound of waves.
The set is created by Filip Homola and his set designer Kamil Bělohlávek with restrained tools, but is nonetheless very effective. The audience sit at the sides of a 10-meter-long wooden table. The actors move around like waiters in a restaurant to the front and back of the table and behind the audience. In the wings, there are two musicians - the cooks in the restaurant.
A rolled out sheet of paper across the table symbolizes the journey to the northernmost Rudolf Island. The paper becomes a frozen path with a small dogsled, illuminated by LED light bulbs attached to icicle-like pointers, and it’s going to conqueror the “empty space”. The dogs that pull the sled leave bloody footprints in the snow (the dogsled is pulled by a tiny string and the footprints are created by a paint roller hidden under the sled).
As we are still in the north, paper is also used in the set for the story of the Bear Island. A moving, “abstract” graphic of pictures and texts (pages from a book) are projected askew and complemented by feathers that are stuck one by one to the sides of the paper to symbolize the birds, which have been killed by the bird lovers who prefer stuffed animals to live ones. The projection slowly turns red and the roll of paper moves away from the table together with the feathers. 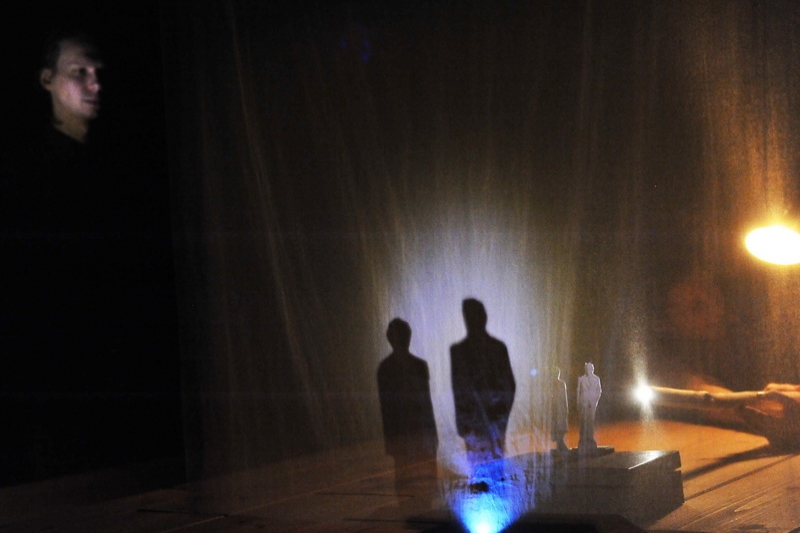 Visual symbols also represent the other islands. For St. Kilda Island, where babies died soon after birth, there were glasses filled with floating dolls’ heads in eerily illuminated water. The story of Howland Island, which was unfortunately missed by a pilot in her effort to fly around the globe, is symbolized by a model of a plane running off the ground on a runway on the table. When Deception Island with its mass whale industry is discussed, pieces of meat fall on the table directly in front of the audience. The meat is made of plastic, but the sound is very realistic. On Pingelap Island people cannot see colours and they avoid daylight, but at night they can see what others cannot. For example, dark shoals of fish in deep waters are symbolized by a black and white projection of fish, jellyfish, and planets onto five transparent white sails hanging above the table. A shadow play of a man and a woman and old portraits arranged on the table are the images used to illustrate a story about a child from Brittany, who learnt the language of the native inhabitants of Rapa Iti Island. Finally, in the story of Takua Island, where people remain to be near the spirits of their dead ancestors even though the island is sinking into the sea, there is only a blue light. The sails fall. The end.
We are left with the sensation that not only is a small atoll sinking into the sea, but also the entire world. We Czechs are both happy and sad about this. Judith Schalansky might see things differently, but there is nothing more beautiful for Central Europeans than to sail – for example on a five-masted vessel, like the table in this Liberec production – to face our destiny. Finally, we will have the sea we so long for. We wish to have the sea so much that the hopeless stories of the hopeless islands cannot deter us. The double feeling, horror combined with attraction, is the emotion the audience leave with at the end of this production.