Straight away, in the title (originally the subtitle) there is a clear difference between this Czech theatre production and the book, on which it is based, by the Belarusian writer, Svetlana Alexievich. She doesn’t imply the end of the human, as suggested by the three dashes in the title of the Czech show, but of “the red human“. And by red she means soviet, “Homo sovieticus”. People living in the so-called satellite countries, for example former Czechoslovakia, can hardly be included. Even during the height of the popularity of the Soviet Union, hardly any Czech felt soviet. That is to say, to be a soviet human, one has to possess a set of certain specific features: Homo sovieticus is usually proud to be part of the Soviet Empire even if s/he is its victim. And most citizens of the Soviet Union were victims. While reading this book, a collection of personal confessions; sometimes complete stories, sometimes just disparate viewpoints from “the red people”, I came to the conclusion that Stockholm syndrome, if the whole society acts accordingly, should be renamed “Stalinism”. (That this is not a coincidence can be seen in the chapter called On the little red flag and the smile of the ax, where the son of the architect Anna recollects a quotation which “sounds like Stalin” that “fear is also certain form of love”.)
Staging Alexievich’s prose is essentially impossible. Even if the production, in an effort to cover the whole book, were to last several days; even if it were a masterpiece performed by great actors; rightfully it would lack the documentary authenticity of the original and the “cinematic” suggestion of retold stories. Sometimes literature can be an incompatible form for staging. In which case, the only appropriate approach might be the one chosen by the Spitfire Company. Here, except for one section, their show The End --- of the Human doesn’t tell stories from the original book (the exception being the scene right before the Epilogue, called On a loneliness that resembles happiness…, which is a supercilious self-presentation of a contemporary careerist and single mother). 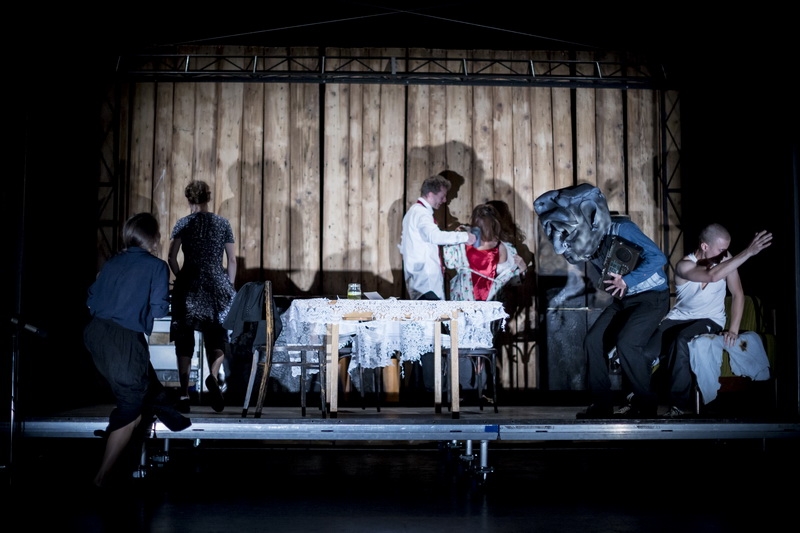 This creative team doesn’t try to mask their countries of origin, and not just because there are three Russians in the company, they use this information as a magnifier to help their audience see more clearly. But their gaze isn’t turned towards “the red human” (here, unlike in the book, they evoke more fear than empathy); but instead their gaze is turned onto their own ranks. The performance itself represents rather than tells the story, rarely is the history acted out on stage (as in The General, which is inspired by the aggressive moods described in the book, so that here, three old fellows, witnesses of powerful and great country, have it out with a young, arrogant personification of capitalism).
In the production, the writers use some of the statements from the book and loosely draw inspiration from certain of its situations: the main source being The Charms of Emptiness, the second part of the book, which is devoted to the era after the breakup of the Soviet Union. And there they find the largest number of parallels with the mindset and anxieties of the contemporary Czech. As they state in the programme, their main interest lies “especially in four areas: resentment and sentiment towards the past, the frustration of people here and now, racist and social nationalism, and the fate of women in society.” These themes run through the structure of the production, which is divided into ten sections.
Even if this „remade“ version stems from literature, it can’t be called drama. And not only because of its concert-like frame: with the quartet of musicians around Jan Kučera performing music in a classical style (for example, in the scenes where the small altar boy crosses the stage to incense it in the Prologue, and then again when he comes back to steal Messi's soccer outfit from the pile of things in the Epilogue). In fact, the whole production leans towards a musical-dance form. Not that it lacks the spoken word, but because the words often dissolve into other layers of speech, tones, sounds; and they turn into music when the text passages are repeated, and even more so when a recorded voice breaks up into syncopation. As a result, we are not always able to grasp everything; just fragments at a time. And precisely this fragmentary nature enhances the impression of fleetingly overheard street talk or a glimpse of a memory or an idea. This applies even when the speech plays an important role.
For example, in the scene called The Scolding words are accompanied by a dance of gestures, reminiscent of sign language. Several times, first performed live, then in a recorded version, and finally in Russian we hear the text passage about Russians, which, apart from its last two sentences, could just as easily be about us: “We love chatting in kitchens, we worship books, we are readers, observers. At the same time we foster feeling of our own exceptionality, superiority. On one hand, this particular feeling prevents us from changing our lives. On the other hand it assures us that there is some meaning behind it all. In the air there is constantly this idea that Russia has to create something; that it has to present something remarkable to the world. Because Russians are God’s chosen nation.” The accompanying movement is created by a series of repeated gestures: two fingers on lips, open palms symbolising pages, fingers pointing to eyes, arms lifted, spread and stretched, palms turning into fists, fingers forming into an exclamation mark. These gestures accompany the whole scene while the speakers and their characters alternate. Sometimes we hear real complaints - about the former ruling class, which nowadays own companies and villas in Cyprus and Miami; about markets and shopping centres replacing libraries and theatres; another time it's bragging about wealth (cars, flats and even crocodile skin shoes). “You all wanted capitalism, so don’t now scream that you were deceived.” At the end of the scene this sentence is shouted in chorus, progressively faster and louder, until it escalates into hollering. Similar dynamics can be found in other scenes, too. Sometimes this means a literal stage image of a folk jamboree (On nationalism), in which episodes of serving beer, practising a Mexican wave and demonstrating a trained collie, culminate in a cheerily hateful chant “Get out of here!”, addressed to everyone - from Uzbeks to Czechs. 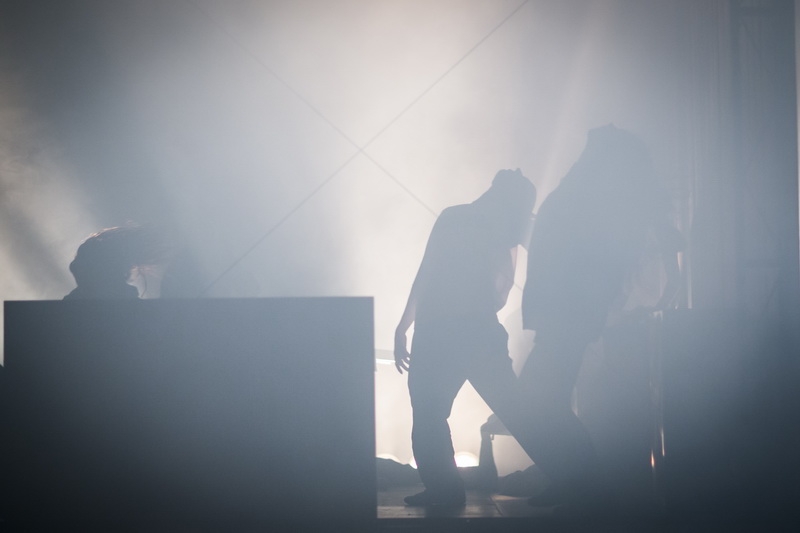 In other cases (The Kitchen) the structure is trickier. Inspiration comes from the Soviet flats which housed several families, and which in the show are represented by a realistic combination of a kitchen and a living room with the furniture partially damaged by fire. In this space a basically silent scene takes place. It is complemented only by recorded sentences borrowed from the book, which reflect the 90s, an era of victory over communist rule, when we were naively intoxicated by freedom while “the smart ones were dividing up the oil and gas supplies”, and the consequent depression which resulted in a return to leftism and murderous blood-craving. Here too, words are repeated, broken up, phased. At first sight the action seems to be as realistic as the room in which it takes place.
A man takes a cigarette, the very next moment he tosses it into a jar, out of the closet he takes a bottle of brandy, which he brings to the table together with a glass, he drinks and in a tipsy manner staggers to an armchair. A woman, hiding her ferocity, pours the content of the jar into the sink, returns the bottle and the glass to the closet, forces the man to get up from the armchair and re-arranges a cushion. The guy sits down at the table again, takes a cigarette, walks over to the closet for the bottle and glass… A girl in a bathrobe joins the repeated stage pattern. She blow-dries her hair. A good-looker flirts with her. Another girl with books appears. She is handed a dustpan and a brush, she sweeps around the table, the good-looker inconspicuously crawls on all fours towards her, makes advances to her, she tries to avoid him, gets up, walks to the drunk, he pushes her away, she crawls on all fours towards the oven and puts her head inside… Everything is repeated over and over. Then an old man and pregnant woman enter the stage, she sits down on the edge of the armchair and screams in pain. Both speech and movement starts to stagnate. At that moment the drunk takes a rope and tries to hang himself. Without success. Finally they all “freeze”: in the closet, under the table, in the sink, in the oven… Because of the repetition, a kind of dance springs up from the realistic, “storytelling” sequence of movements. Duets and solos mutually mingle into a vivid growing evocation of despair.
The repetitions appear in many forms. Sometimes they are just a single, recurrent movement sequence. As in the scene On the fate of women, men push women under the planks of the low stage; and in the part called On one act three female dancers keep spinning their heads of long hair, under which their faces are hidden until they are interchangeable; or the situation after the terrorist attack, called On a desire to kill them all, which is played out by a group of characters, who stagger through the smoke filled space in the same catatonic, swaying way…
While the book represents a concentrated despair: disappointment, anger and fear prevail in this production. And I would say that nowadays those emotions are quite common among Czechs, even without having had the drastic experience of the “red human”. We just let the “crappy mood” inflame, to which we seem to be inclined probably due to our laziness or envy. Anger at all levels (right up to the point of aggressive hatred) aimed at everyone (from the rich to the homeless, from Czechs to foreigners) is the consequence. And we all have to be afraid of that: not just of being victimised by someone else’s anger, but of being seized by some kind of anger ourselves.