Fascination as a Form of Communication (Experimental Poetry in DISK Theatre)

There is a batten on the stage. There is also a pair of scales. There are people. There is silence on the stage. Nothing happens. The silence is interrupted when one actor moves a bit. The static image moves. Nothing happens. And then steps. Movement. A girl brings a grater and a bell. She leaves the bell on the stage and takes the grater behind the side curtains. Nothing happens. In the first few minutes of the production a total concentration is initiated. It passes on from the actors to the audience. The shared tension is almost tangible, everybody is as quiet as a mouse; everybody is alert. Both parties feel that even a noisy breath or an unsuppressed cough might destroy the delicate atmosphere. But it does not happen. The reward for the supressed breath is a theatre performance of a shared experience, an experience of the desired “flow”, an experience of sharpening the senses.
The production mouth will end it was created as their ‘Masters’ production by students of the Department of Alternative and Puppet Theatre, Academy of Performing Arts DAMU in Prague, led by Jiří Adámek, a director and a lecturer at DAMU. Adámek has for a long time been interested in working with sounds, noises, and voices, often in connection with a distinctive visual stylization. He often explores scenic forms that connect theatrical and musical techniques. His authorial projects are characterized by the absence of drama, i.e. the absence of narration and by his own original approach to words, meaning, and form.  Experimental poetry, on which this production mouth will end it is based, is therefore a logical source of inspiration. 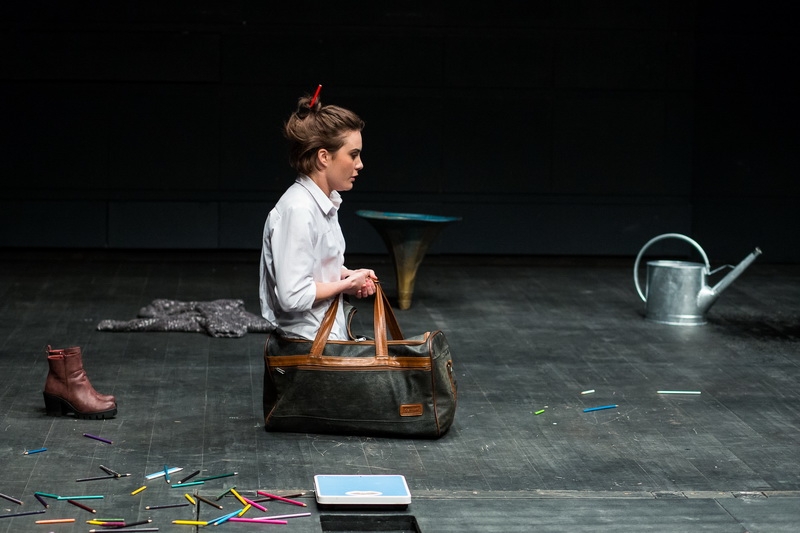 The production works with texts published in the poetry anthologies Experimental Poetry and The Casting of Dice; both edited in the 1960s by Josef Hiršal and Bohumila Grögerová (translators of most of the poems). This type of poetry is characterised by its play with words and meaning, for its lesser focus on rhyme and rhythm, and for a shift from melodiousness and metaphors to the language itself. Adámek is not inspired by surrealism or nonsense poetry, but by concrete poetry, a parallel to abstract painting. Concrete poetry includes ambiguousness: a rational approach and an exact, coherent structure together with interest in chance and play.
Chance and play as a point of departure can easily seduce one into a mere play with form, to an autotelism distant from reality. In this production, however, it is not like that: the production is very funny and enjoyable. Despite the focus on rhythm and form, the final shape is thrilling, bordering on the suspense of a detective novel. Adámek works with increasing tension, with the desire to discover the meaning of what we are seeing through the meaning of the individual words. Yet, the meaning keeps on escaping us. The punchline is surprising: the repeated phrase “mouth will end it” is said and we still know nothing. In the end, we do not even want to know. During the performance we come to the liberating conclusion that the intellectual quest for a punchline is useless, and that it is enough to follow the stream of disputed, and by repetition seemingly transformed, words.
Although experimental poetry originally rebelled against socialist folksiness and comprehensibility, the topic of the emptiness of meaning is relevant even in current times, which are characterized by an overload of words. The written signs that pour through social media channels can be understood as structural poems in their own right. The information stream often resembles Hiršal’s and Grögerová’s determined texts. Adámek does not stress this almost-too-obvious link, as he primarily focuses on examining the original principles of the genre. Together with dramaturge Klára Holečková, they choose authors whose individual approach to experimental poetry can be clearly presented.
In the production there are not only texts that are easily understandable, which use the principle of repetition (for example, The Catalogue of Incorrigibles by Hiršal and Grögerová), but also completely fragmentary, abstract texts. There are also the so-called processual texts, which focus directly on the movement in the language and its alterations. Adámek, given his interest in the application of musical principles to theatre performance, works with Zdeněk Barborka’s Fugue. Barborka transposes the musical model into a text following a strictly given procedure. A poem for him is a collection of transformations, a sequence of operations that the text fluently undergoes. Barborka looks for the main theme of the fugue, in all its repetitions and variations, and replaces it with words. The result is a large number of variations on the original text “when you come, when you go, when you enter”. The actors at first recite this text rhythmically, but the recitation gradually disintegrates into the individual voices of the fugue and changes into a canon song almost, in which we can follow each line of the variation.
The musical inspiration for the production is closely linked to the phonic poetry of Ladislav Novák. In this type of poetry, the speech sounds are artificially modulated, they overlap and change into incomprehensible sounds. Speech is understood as a bodily function: the actors use intonation meticulously and create variations on the melodiousness of the texts to resemble sing-song. The meaning of the individual sounds disappears – just as if you repeat one word again and again to yourself and suddenly the word stops making any sense and what remains is just an empty cluster of speech sounds. The only possible solution in order to understand them is silence. The exactly timed pauses, and moments of silence, are the means, which hold the suspense and expectations for the entire production.

The principle of play uses the mangling the words (the refrain “and therefore it is necessary to walk quietly through the chambers” by Honys is repeated throughout the entire production) and it leads even to the deformation of words (in the poem Snow from Ladislav Nebeský’s collection No play). Playing with variations is seen, for example in the serial poem Full by Jindřich Procházka, where permutations of the title word “full” are used. There are also structural poetry and forms that are much more difficult to understand; for example, the abstract Non-semantic Text by Josef Hiršal and Bohumila Grögerová, which does not take into consideration the pre-defined meanings of words, but works with their statistical choice and frequency of positioning. The text is composed of meaningless empty words (for example, particles, prepositions, conjunctions, and other structure words) that together create s certain tension or even emotion. The tension of the pronounced word is built up thanks to a changing tempo, rhythm, and cadence. Even the declamation of particles thus has an emotional character.
The production does not try to map all the areas and methods of experimental poetry, the key to the selection of poems corresponds to the chosen poetics: it is based on chance, play, and the Dadaistic “sticking of a knife into a book”. The result is both an overview of the basic principles of the genre and also it can be understood as a meta- work, an experimental poem in its own right. The mixing of structures, which seemingly do not make any sense (because they are automatically generated by the rules of formal grammar), with texts that are playful and more comprehensible creates a new semantic shift and a unified theatrical form. The actors speak simultaneously, pile up repeated passages on top of each other, motifs return and vary. The units that merge are no longer words, but individual poems. Correspondingly, the stage design also changes. It includes not only the space of the stage – the actors often circumvent the auditorium, act behind the proscenium arch (we sense their movement, hear sounds), they disrupt the usual space.
In addition to the phonetic aspect of language, the production focuses also on the visual-polygraphic nature of experimental poetry. The layout of graphic signs or words is represented, by Adámek and the students of set design, in the unusual layout of the objects on stage. It looks seemingly nonsensical: standing battens, a pair of scales in the space, a symmetrical opening in the centre of the stage, which functions as a trapdoor, an agave plant, which resembles a ready-made object by Marcel Duchamp. All these objects attract attention by their nakedness, their “being” in the space. They are not hoarded, but rather positioned in such a way that each object stands out. We start to think about them as individualities, we notice their shapes and colours. The parallel is clear: in experimental poetry the word loses its primary function, in a similar way to the objects on the stage. In the production, however, the objects act also autonomously. Different things are often thrown on the stage by an invisible hand from the trapdoor in the centre as if their appeared there without external help. A sink plunger attached to the wall suddenly falls down and makes a squelching sound and a bang. Objects are animated by various sound systems and thus put into new contexts. Thrown oranges slap on the floor, a kicked grater clatters, and a piece of chalk is grated rhythmically on it. 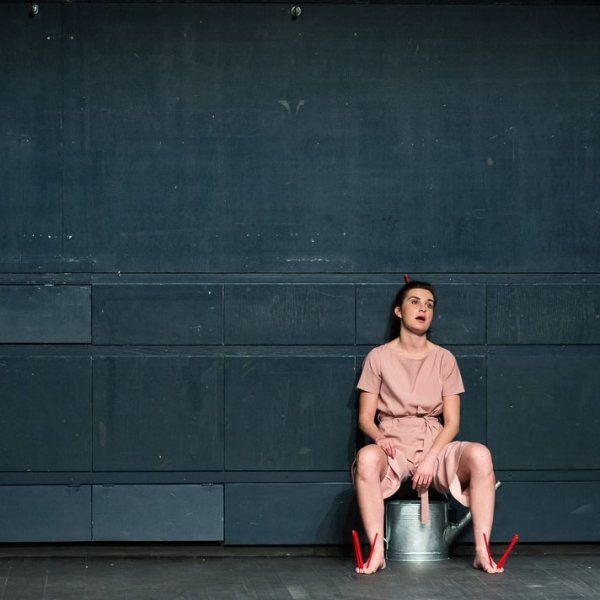 The director treats the actors in the same way as the objects. People move around (or are moved around by others) on the stage, they become statues in space, make sounds as if they were just animated loudspeakers. Two actresses behind the scenes exchange their costumes in an unguarded moment. Some spectators probably do not even notice – a specific person is not important here, each one serves the production as a whole; the individual is only a random filler of a costume. The highlight is a girl wrapped in a sweater, who in the final scene when the others are leaving the stage, completely merges with the inanimate objects. A similar idea is expressed in a scene where the actress partially disappears into a travel bag and moves only by small jumps as if she has become part of the bag. Half human, half puppet.
Everything happens with enormous concentration, with total presence in the situation. The consistency with which the students of DAMU accomplish their instructions is admirable. The whole group is well disciplined, everything works like a well-oiled machine, nobody is trying to outshine the others, their coordination is perfect. The actors do not even blink at the audience, let alone react to their laughter. They are restrained – anything could disturb the production. It is clear that Adámek as a director and a teacher is able to justify and clearly phrase his intentions and knows how to guide his students. Furthermore, he really manages to inspire fascination, which (according to Hiršal and Grögerová) evokes a deep concentration that also affects the audience. It is joyful to watch how the actors understand and are able to keep the rhythm, how they link words exactly as needed in the text (“m sun m pickled” etc.), how meticulously (and with appropriate pronunciation) they repeat long passages of the text, which includes slight variations at exactly given moments (Nataša Mikulová is especially good in the declamation of Non-semantic Text). An unconcerned observer might consider this perfectionism almost painful, but the production is so engaging that it is pleasurable to see the actors taking their job so seriously. It is nice to see a ‘Masters’ production that is so well done, and it’s refreshing to experience experimental theatre that can enliven a solely conceptual genre without being incomprehensible or self-serving.