The thirty-ninth title of the Stoka series is Post-Factotum. As in the case of Wellness the script came to existence “through the method of collective creation”, the cast is also similar and the mosaic structure revolving around a hardly definable mood rather than a theme is also analogous. The official notes confirm the apparent interpretation of the title as a response to the contemporary, so-called “post-factual” era (“The Earth is flat, Finland does not exist. The truth is not fundamental. Five actors move around an unclear scene, in uncertain relationships, their characters vanish totally in some places…”). But I found that the only direct references in the production were in fact a certain interpretative strain and courage, which is certainly not meant as a criticism.
Jingling reverberates through a gloomy theatre hall as if a Russian troika is coming and there is a whirring which is less definable but sounds frightening and almost apocalyptic: this sound divides the various scenes of the production with slight variations and as it gradually clears, we find out that it is a distorted version of the song The Lime Was Burning, Burning which is heard directly from the stage at the end. Then Braňo Mosný in the costume of a French-style waiter emerges in a vista of slight additional lightning between two drapes on the backcloth. With his hands outstretched in front of him he holds the thin stems of wine glasses between his fingers and as he moves his fingers the goblets knock against each other tinkling. But it is not so simple: with a completely serious expression of importance Mosný walks with bent knees kicking his legs comically in the air (“a la Monty Python”). The sound dies down backstage and Tomáš Pokorný and Michaela Halcinová enter. They are also very smartly dressed: Pokorný in a suit with a waistcoat and bow tie, Halcinová in a rather revealing but still decent dress. They are fully absorbed in each other, teasing each other and they are generally self-satisfied and beaming. When the waiter (now erect) brings the first table they immediately leap at it looking around for chairs. Somewhere at this point the first English words of the production are interposed: “What a lovely place.” Pokorný articulates them with a “globetrotter’s” haughtiness in the manner of such a man appraising a slightly suspicious but distinctive establishment. Mosný brings another table and this time also a chair. The couple moves to it and the lady sits down. When waiter returns with a second chair he seems to push it obligingly towards Pokorný but instead moves backwards and his “victim” squats just before sitting down thus moving backwards, too. Together and in this curious position (Pokorný moving steadily backwards squatting) they leave the stage, come back into view and return. Pokorný finally sits down, lounging and teasing his partner and repeats his, “What a lovely…” as nothing has happened. 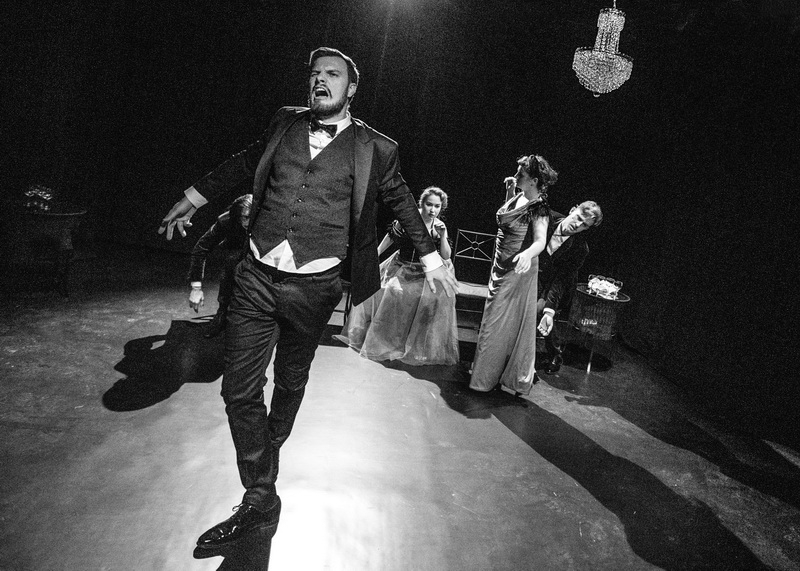 Many scenes in the production are twinned. The one above is completed in a dialogue between Pokorný and Libjaková, again in a stylized Slovak, reinforced by the impersonalized addressing of each other in the third person. It is again completely empty “small talk”, this time perhaps between members of high society, maybe about travel (the Taj Mahal and other historical sights are mentioned). However, the situation is physically complicated – both speakers move into more and more acrobatic postures using Mosný and Halcinová as their “gym apparatus”. At first they just sit on them (Mosný and Halcinová lie on the ground on their stomachs with their legs bent at the knees) but they gradually become more and more entangled with them. The living furniture conforms willingly and even starts to talk itself: the “Are you still alone?” textual refrain returns.
The following scenes from a doctor’s waiting room are also paired. Mosný on crutches asks in vain who is the last in line. He gets only contemptuous and almost hateful reactions from the uninterested people waiting. When there has been enough mockery the so far heavily and slow-moving Mosný suddenly comes alive and inspired by action heroes he gets his revenge in a series of kicks. The ruthless tormentors topple down in slow motion.
When the situation returns it is at first sight analogous. Again a waiting room full of uninterested people and again Mosný on crutches. And again the question about who is the last in line. But quite a few things are different. Mosný’s voice is throaty as if it is hoarse from incessant questioning. The people in the waiting room are immersed in various disgusting activities: Tilajčík is picking his nose, Halcinová removing dirt from between her toes and Pokorný tops it all when he first scratches his crotch and then smells the hand he pulls out from his trousers and then busies himself with the contents of his bellybutton and with tasting everything he finds there. Mosný indicates that everything could perhaps still turn around when he makes himself dance for a moment out of sight of the others, gazing into the audience. Expectations are confirmed by Pokorný’s answer to the repeated initial question – he points to the backstage and in a voice similarly throaty to Mosný’s he says: “I’m only waiting here for my wife.” Applause and the enthusiastic screams of spectators are immediately heard from a loudspeaker, actors step out of their roles and with glances of friendly admiration Mosný turns to Pokorný. He embodies modesty, pretends to blush, it is embarrassing for him but he enjoys the admiration, moves to the front of the stage bowing and beckoning to the rest of the cast who he applauds quite unpretentiously, of course – in short orgies of traditional dramatic double-dealing. Collective dancing follows, a very short scene in which Pokorný and Mosný alternate crazy orgiastic movements with painful grimaces and then there is the closing scene of the production: actors sit on chairs facing the audience and a sound of a starting – perhaps two-stroke – motor is heard. It seems it is ready to move off, the actors are shaking as if they are driving, but the motor suddenly dies. This is repeated several times with a constantly increasing intensity and finally an imaginary inertia catapults them from the chairs (however, like many times throughout the production everything happens in slow motion) and they are thrown against the audience where their bodies and faces get smashed against the invisible fourth wall. Libjaková cries out. It becomes dark.
The production has a distinct rhythm and is unreservedly restrained. It did not occur to me – albeit in the case of the only act – it was lasting too long. If this threatens, there is an unexpected point or “sidestep”. The audience’s attention and desire to follow developments on the stage are also maintained by the outstandingly focused performances. They are first and foremost unusually realistic; though apparently stylized (and thus requiring real performing, not “only” personalities existing on the stage) they are devoid of lavishness, swaggering or anything like flattery. But at the same time there is evident captivation and a gigantic effort. And most importantly it all makes sense.
At first sight there is no obvious link between the individual scenes in Post-Factotum but the production cannot be perceived as a series of sketches or as certain haphazardness. There is a strong undertow of that vague feeling already mentioned several times that something is wrong. In other words, as expressed through the production’s images: the contemporary world is not such “a lovely place” at all, it is hard to say what the future holds for us but if anything then elsewhere is elsewhere.