Thanks to kind approval of Mrs. Dagmar Havlová, could Svět a divadlo award one of the texts present in anthology Bancruptcy and other plays about politics (Bankrot a další hry o politice) with Ferdinand Vanek Award, named after literary alter-ego and main hero of short plays by Václav Havel. The winner was decided by international jury consisting of bohemists, translators and friends of Mr. Havel – Andrzej Jagodzinski from Poland, Martin porubjak from Slovakia and György Varga from Hungary. Historically first Ferdinand Vanek Award came to Małgorzata Sikorska-Misczuk for the text A Country, From Where Escaped Citizen’s Hearts and Left Letters.

Ceremonial Presentation of Ferdinand Vanek Award (and launch of the anthology) took place in presence of the authors and under the patronage of former Czech minister of foreign affairs Mr. Karel Schwarzenberg at Dejvické divadlo in prague on November 17th 2013. Part of the event were also premieres of “scenic sketches” Ferdinand Vanek Lonely Hearts Club Band (based on texts by Małgorzata Sikorska-Misczuk and Julia Holewińska) and Bankruptcy Roundabout (texts by Christian Lollike and Csaba Székely) which were prwpared in cooperation between Svet a divadlo and Dejvické divadlo. Performances based on their own texts presented Vít Peřina (with Naivní Divadlo Liberec) and Viliam Klimáček (with GUnaGu Theatre). Performance Bancruptcy Roundabout later became part of regular repertory of Dejvické divadlo.

In May 2014 was the project presented in Bratislava at the GUnaGU Theatre, where were presented mentioned performances of the texts by Viliam Klimáček, Vít Peřina and Bancruptcy Roundabout. 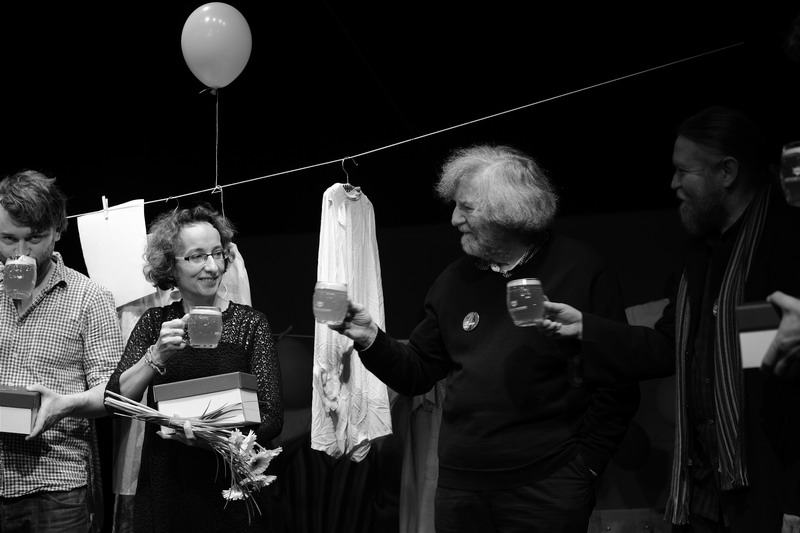