Director Jiří Adámek presented his production The Rolling of Eyes in Studio Hrdinů Theatre in Prague; it’s the third part of The Trilogy of the Senses. The first part Finished by Mouth, was prepared in cooperation with acting students at the Department of Alternative and Puppet Theatre (at Adámek’s alma mater Academy of Performing Arts: DAMU) in Prague in 2016. The second part of the trilogy is a radio acoustic composition called The Ears Game, which had its premiere on Czech Radio Vltava in September 2018. It was part of a series of contemporary plays, for which Adámek and his main collaborator Ladislav Železný, received the prestigious German award Karl-Sczuka-Preis 2019, and also a Czech award Prix Bohemia Radio 2019.
The Ears Game is really unique in the context of contemporary radio plays for its radicalism and rich soundscape. Instead of creating a sophisticated narrative, it is a self-referential work, which explores its own medium, that of radio composition. The technique it uses could be best summarized by in the oft-repeated phrase: “The aim of this radio piece is to prevent the audience from evoking any visual images based on the sounds.” There are many connections with that production and the new one, The Rolling of Eyes: particularly Jiří Valoch, whose work was the inspiration for both the radio composition (Valoch’s texts) and the theatre production; whose thematic starting point was Valoch’s artwork; which the creators tried to translate into a theatre language.
The whole trilogy is characterized by the substitution and interchange of terms and words: a subtle, but profound deconstruction of language; and precisely constructed nonlinear compositions. In addition, the final part of the trilogy contains meticulous and refined work dealing with objects and the theatre space. 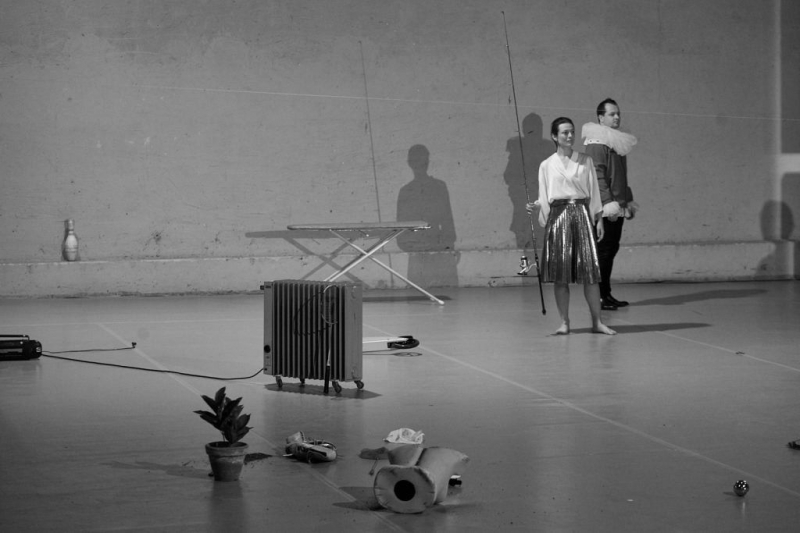 The Rolling of Eyes was created by some of the production team from the previous project (Finished by Mouth): namely, the dramaturge Klára Hutečková and the designer Zuzana Sceranková, together with Adámek’s long-time collaborator, the musician and sound designer Ladislav Železný. The actors’ ensemble has changed slightly; alongside Adámek’s usual collaboration with the actors Veronika Holičková and Dan Šváb from the Boca Loca Lab; now there is Ondřej Bauer, famous for his work in Vosto5 Theatre, who also collaborated on the radio piece The Ears Game; Kateřina Neznalová, an actress from Pomezí Theatre; and Fedir Kis, a student at DAMU.
While Adámek’s previous productions have often been criticized as too academic; his unusual precision being seen as a quality which makes his work somewhat detached; it is impossible to miss the layer of subversive and anarchistic humour in The Rolling of Eyes. The piece (like the other two) examines its own medium: which this time is the medium of theatre production, and it systematically deconstructs and undermines the components, which include scenography, costumes, music and lighting design. The Rolling of Eyes is a refined orgy of impropriety, which the audience at first watches in disbelief, and later, once they are drawn into the game, enjoy with a childlike delight. What we see is fully controlled, but the rules are completely rewritten; in an unknown code.
The production begins with an empty stage and the actors speak behind the backs of the audience, for a relatively long time. The first sentence - “Oh, uttered Lucrece, and moved her left arm towards the back of her neck” – is the only sentence that offers a semblance of a story. It is repeated a couple of times during the performance, but there is no continuation of this storyline. The sentence is an axis for the entire production; the actors come back to it repeatedly; it functions as a refrain and as an organic substitute for the missing story (replacing it at critical moments, or at least suggesting it). Personally, I would be afraid of getting rid of this story residue. Apart from this ‘false clue’, the actors have to make do with descriptions of the situations; in which they and the audience find themselves.
The actors present an unusual group in beautifully incongruous costumes (the chain mail shirt of Dan Šváb, the evening dress of Kateřina Neznalová, or the ruff worn by Ondřej Bauer); they often speak about themselves in the third person; or refer to their characters based on where they are: (the man behind the column, the woman in the shadows); only Ondřej Bauer addresses himself openly as ‘the Duke’. The most mysterious is the inconspicuous Fedir Kis (in a turtleneck and with a chain around his neck), whose refrain is to assure the audience that the performance has already started. We do not know exactly what has started; but it is already happening. 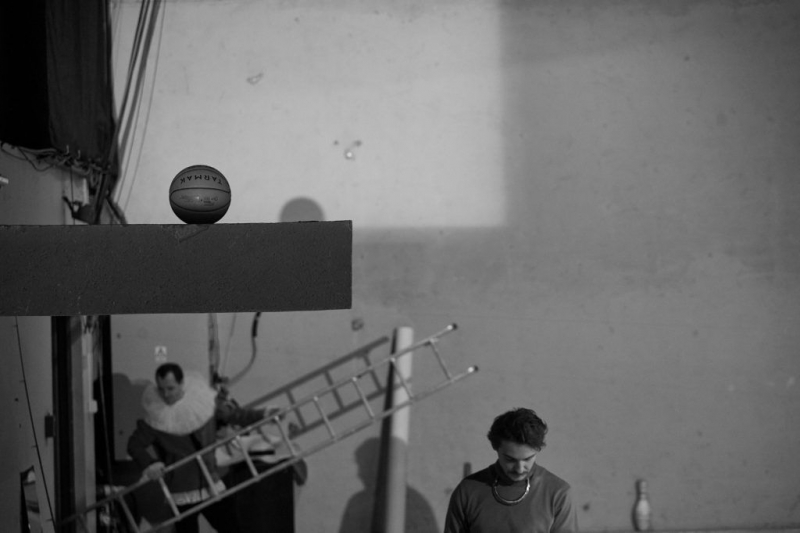 The characters are interrupted by lengthening interactions with objects; most often completely without dialogue. At first, the objects are placed unobtrusively along the sides of the stage and in the corners; so it is at first difficult to see whether they are part of the scenography, or just theatre equipment that somebody forgot to put away. Everything seems to be a hastily tidied mess. During the production, however, the objects become the instruments of a sophisticated chaos, which gives them definite meaning. The way objects are used in The Rolling of Eyes is very unusual for the Czech stage; but, more importantly, it is very enjoyable.
It seems at first that we are going to watch the obligatory ‘meeting of an umbrella and a sewing machine on an autopsy table’, but the reality is much more sophisticated. While in his work with the text Adámek ‘only’ confirmed his qualities, his work with space and props is really beyond his usual territory. Moreover, he presented ‘object theatre’ which is currently unrivalled in Czech theatres. The collection of objects used does not say much: an ironing board, a medicine ball, a bow and arrows, cutlery, a stepladder, a fire extinguisher etc.
The actors rarely use the objects on the stage for their original purpose; on the contrary, they approach the objects as if they were seeing them for the first time, for example, when Fedir Kis tries and fails to bring down a basketball stuck on a ledge simply by reading a book. Sometimes the objects are carried from one place to another, or are heaped on each other aimlessly, in absurd quantities, for example when Ondřej Bauer repeatedly throws books and shoes onto the stage. The objects are torn away from their usual contexts, yet the aim of this extraction is not an ‘imagination and renaming’ game, but a de-naming process. The objects become unpredictable partners; and slightly less unpredictable performers.
Even the column from the title of the production in Czech[1]/ is a real column, which stands in the centre of the stage. In the dark it looks like a real support, but it is nonsensically cut in half in the air, which denies its purpose. It seems to be a scenographic joke, but it actually prepares the stage for a scene where Daniel Šváb as ‘the man in the shadows’ tries to hide behind the column, but while peering through the gap in the column, however, he instead manages to let everyone in the audience see him.
Thee musical accompaniment is approached in a similar way to that of the objects. The music is directly subordinated to the actors, who conduct it by shouting orders from the stage. However, the music is a bad and disobedient servant, which reacts differently to the way it is expected to. At certain moments, when music is called for: (music for entrances, music for the man in the shadows, music for an insolvable situations…). Yet, often after the announcement for music; we hear terrible noises or unsuitable electronic music; sometimes the music starts to play after a long delay. Sometimes it does not start at all: but even then, we feel its presence; similarly to John Cage’s iconic composition 4’33’. In the production, the music, whether it is being played or is missing, creates another sophisticated layer of suspense, and it is in most cases hilariously inappropriate. 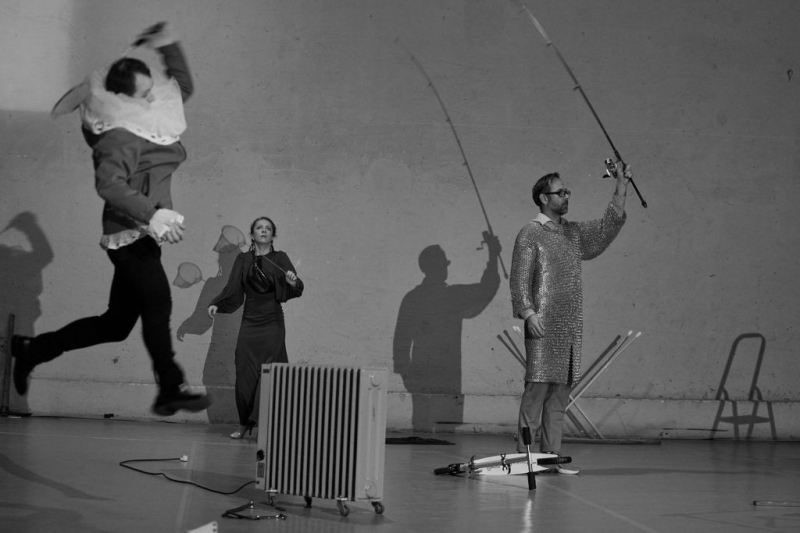 Impropriety and unpredictability are sensed throughout the production not only in the music, but also in the work with props. The text, however, does not follow this principle, as it is mostly self-referential, as if the performers wished to find some ground in this unstable production with the use of speeches. Over and over, they describe the situation they find themselves in; using synonyms and adjectives they play their characters, who almost always lack not only a name, but also a clear motivation. The characters clutch at the straws of the meta-structure and resort to speeches such as: “The first sentence is the nineteenth sentence is the fifty-seventh sentence is the seventy-fifth sentence it is the sentence which again and again wants to be heard.” The frequent addressing of the audience (“And after the interval Lucrece finally finishes the final gesture and then the applause and then home”) is entertaining, audience friendly, but never pandering.
The part where the principle of impropriety and destruction of common relationships is most strongly felt in the text is the speech by the duke, or ‘the man who conquered space’. Ondřej Bauer improves his monologue unexpectedly by the use of inappropriate words such as bathrobe, grater, and zander. Bauer’s scene resembles the final scene of the production Finished by Mouth, where Lumíra Přichystalová in her exquisite number merged two texts into one another live, as if using some acting ‘wrap’ function.
All this impropriety and eruptions of chaos, or lunatic treatment of objects are carefully constructed and controlled. Each moment on the stage is a composition, precise and meticulous, the characters and objects co-exist on the scene in their own universe in a permanent dialogue, and it is not clear who has the upper hand. In the spacious and almost empty theatre hall of Studio Hrdinů, the second and third layer is played with in a sophisticated manner. The actors appear and disappear, in one moment they gradually vanish backstage, where loud music is played behind closed doors, or a string is stretched across the stage and the actors must bend under it for the rest of the production. Fedir Kis spends a lot of time standing motionlessly under a mantelpiece, which hides his face completely and he thus metamorphoses fully into the set.
The actors are a precisely working ensemble: which is not unusual for Adámek, yet this time the audience also notice the actor’s individual performances. Dan Šváb develops with every role; his acting and especially his vocal expression are exceptional. Kateřina Neznalová excels in unobtrusive scenes: her battle with the ironing board; which she is trying to fold and which literally knocks her down, is a wonderful scene. The spoken word delivery is flawless; the Czech language sometimes shines like a diamond. The actors deliver their roles brilliantly and credibly, and those who think that the credibility of the actors’ performances are something automatic or common either have not been to the theatre lately, or they have been very lucky.

[1]) The title of the production in Czech is an idiom which in English means ‘to roll one’s eyes’. However, in Czech a different phrase is used, literally ‘to have one’s eyes in the column’, so therefore there is a column on the stage and there is an entire scene based on this word play.