Wariot Ideal, the Prague-based theatre company, seems to be finding itself in quite an adamant ‘hard-core existentialist’ phase. Their production 28 days, which premiered at the 4+4 Days in Motion festival in 2016, communicated the ‘Robinsonian’ experience of the human being, devoid of all his ‘crutches’; of somebody who really is barely existing. The members of Wariot Ideal also took part in the re-premiered Rain Dance, a production by Handa Gote Research & Development, (another resident company at the Prague-based theatre, Alfred in the Courtyard). Rain Dance examines the present-day need to rediscover meaningful rituals – the idea being - that we all wish to relate to something meaningful, but we don’t know what it should be and how we should go about it. In this ‘DIY’ production, so typical of both these theatre companies, the given quest manifests itself as an extremely demanding task. The result is grotesque with a touch of the absurd; an analogue horror of helplessness amidst a horrific mass of dysfunctional objects.
The Wariot Ideal production, called The Depths, follows on from Rain Dance, both formally and thematically. Even the notional ‘basic questions’ seem to be variations of the previous ones: To what can we relate today? And why do we actually need rituals, what is our real motivation?
The Depths was in fact preceded or maybe introduced by a site-specific ‘Prologue’, which took place during the 4+4 Days in Motion festival in 2018. This open artistic process/performance/workshop was called The Alcohols. Every day from 2pm to 10pm over a period of ten days, spectators visited one of the rooms in the Desfours Palace in Prague and saw a mix of rehearsal, DIY session, art installation and theatrical improvisation all-in-one. The room resembled a typical single man’s workshop; full of workbenches, various tools and miscellaneous junk; there was a television with an old videogame (Wizard of Wor) and a heap of other devices and objects; strikingly, they were often connected to each other with electrical cables, leading to a series of push-buttons. One example out of them all: a fake fireplace. The walls were covered with mysterious notes and current ‘calculations’. During the production, all of the above pieces were put to use by one or other of the three men (Vojtěch Švejda, Jan Dörner and Jan Kalivoda). The three were constantly in the process of making or measuring or noting down something; or possibly preoccupied with something else: some other seemingly useful activity. 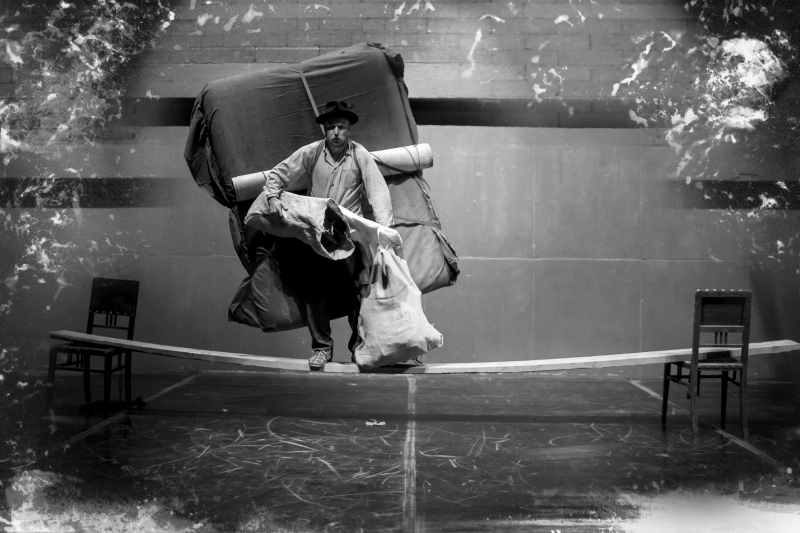 The origin of much of what can be seen later in The Depths can be traced back to The Alcohols. For example, during the workshop the three men fry some bacon in a small pan and later enjoy eating it; washing it down with alcohol – the growing number of empty bottles on the shelf above the hotplate being proof of the amount they have already drunk. Now and then, they played videogames or one of the primitive, ‘home-made’ DIY musical instruments (more or less a few planks with a some powered strings, reminiscent of guitars or basses). They had constructed these ‘live’ in front of the spectators. All of this was done to the accompaniment of loud classical music (in a subtly ironical contrast to the on-going action). The men were also working on masks; reminiscent of witch-doctor masks, and also of Central European folklore masks (for example one of the men played his weird guitar wearing a mask on his face made from a fruit crate decorated with foliage, which had a nail brush for the mouth. During my first visit, one of the men climbed repeatedly on a table and jumped down on a mattress covered with leaves, where he then lay for a few minutes, wide-eyed and quite stiff. Another one busied himself with the slow writing of a cryptic text, one letter at a time. A few days later the whole text was already pinned on the wall; saying approximately the following: “the existence of a piece of wood should not be messed with; human beings should not try to impose their will on it.”
This was just the same in the ‘actual’ production; where the trio performed all the tasks and activities with the utmost gravity: whether, banal, practical, or everyday (such as frying meat, or playing computer games, etc.); or the cryptic, seemingly more ‘artistic’ parts:(the concert performance, the grotesque falling off of the table, etc.). The ‘message’ being: all of this pertains to life and all of it is equal, there is no ‘high’ and ‘low’: nothing is more important than anything else.

* Most of what was prepared, handmade and created in The Alcohols thus appears in the ’actual’ theatrical production in Alfred in the Courtyard Theatre. The Depths are introduced by a variety of thunderous and buzzing sounds – a fusion of didgeridoo and dripping water, throbbing and ‘industrial’ creaking; a monotonous rhythm and total darkness. When the stage partially lights up, we are facing three wide-eyed men, each weighed down by miscellaneous junk and clutter. Next to one of them we can see a pile of dry leaves. ‘McCarthyian’ post-apocalyptic pilgrims, maybe! Or something of that sort, anything really that rings your bell: which should be emphasized right at the beginning; and it is something that should be persistently praised in Wariot Ideal’s work: the open ground for individual interpretation (for your own associations) is extraordinarily wide. One can always rely on a first impression, on an immediate feeling; rather than attempting a rational analysis. 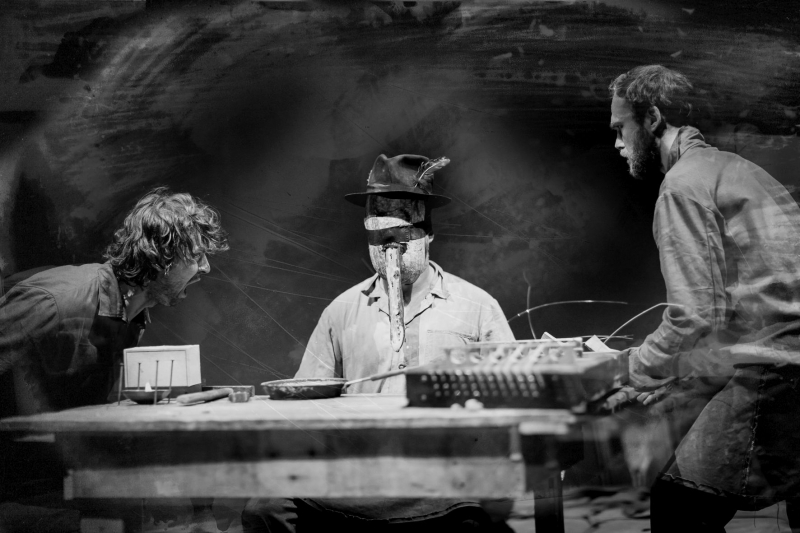 The trio come across as heroic, moving, and funny all at once. The protagonists are dressed in soldier-like khaki shirts but with a distinct folkloric twist. They have leather craftsman’s skirts over their trousers. Dörner reminds one of a samurai warrior; where rubber mats replace the typical armour. One of the men has a huge mattress tied to his back: another one carries a desk; like two human butterflies with very heavy wings. They also carry rolled up rugs, buckets and sacks filled with God-only-knows what. The third man sits on a chair, holding a long, erect plank. Moreover, they are all equipped with those strange, DIY musical instruments. These are at once primitive and except for the homemade cymbal, are comprised only of a plank and a couple of strings… but they are also ‘modern’ in that they are all electric.
The three protagonists – sternly poker faced – then begin their journey from stage left to stage right, under a huge section of broadleaf branches, which are hanging from the set. This is quite a strenuous process, given the burdens they are carrying. The journey involves crossing a plank placed in between two chairs, plus the subsequent pulling of the chair that stayed at the departure point, by means of a spooled wire, which one of the men wore around his neck. Reaching the ‘other side’, the trio begin to install themselves there. Just as in the ‘prologue’, all the action, even the most mundane, is performed very slowly, with great concentration and gravity, almost ceremoniously. One of the men (Jan Kalivoda) attempts with exaggerated effort to raise the long plank and place it against a wall. Then he spreads a painted cloth (part of an old stage set) on the floor, so we can gradually make out the images. At first it looks like a grass field or some forest scenery, however, a surprise comes when the lower half of the linen is unrolled. The whole thing is a giant reproduction of some classical painting and it captures a pastoral scene with a few naked men and women, who are indulging in conversation and the arts (reading and playing musical instruments). It is a heaven on earth: unrestrained freedom, which contrasts with the creaking and screeching and electronic feedback that accompanied the less idyllic activities of the trio on the stage. The other two protagonists (Švejda and Dörner) assist in the rollout with ritual solemnity: they keep spinning around (like folkloric dancers? dervishes? Asian warriors?); and when the ‘carpet’ is finally spread out, they ‘stamp out’ the edges of the linen in an artless rhythm. It’s as if they were achieving some timeless (or any old accessible) form of a ritual; the creation of circles and rhythms; to sanctify their actions and provide them with deeper meaning: Or to at least attempt to do so.
The men gradually remove the objects tied to them; Švejda falls back on the giant mattress and wrenches himself free from the straps. Dörner’s liberation from the desk is much more demanding. The desk, which he carries on his back, is equipped with inserted table legs and a hammer. The two other protagonists thus start building the table live on stage. The table legs are hammered in while the desk is still on Dörner’s back. The man under the desk is being pushed to the ground with each blow and is evidently suffering. The finished table is then turned over on its legs with the man still tied to it – he now lies on the desk with spread out arms, like a human sacrifice. An ideal setup for a ritual to start – the two other men go about placing various objects around him and all over the stage, with complete reverence and deliberation. There is no doubt that all of this has some ‘deeper meaning’. In fact, the whole production seems to be saying: let’s re-imbue things with value; let’s give meaning to our actions again. They may be a bit futile, yet it is all we can do.
Thus, the men put a chair at the front of the stage and on it they place the long ‘plank’ musical instrument; á la bass. Stage left they roll out a rubber mat. The sacrificed man is made to hold some electric cords, so it looks like he is going to get electric shocks. The two men bow down with reverent expressions, placing a wooden chest and some linen sacks in front of the table. From one of the sacks they pull out some boots, which have paper wrapped lard attached to their soles. The sacrificed man is freed from his old-man’s slippers, which are then replaced by these boots, in which he is to ‘take on’ the world. Then he is given a helmet like that of a welder or hockey player. From a wooden chest, (the interior of which reveals a parody painting; of the Holy Family with the mother and the child both wearing the father’s moustache), the two ‘servants’ pull out a bottle of wine and some thick slices of bread, which they arrange around the oblation. But even before that, Kalivoda ‘ceremoniously’ touches his forehead with each slice, which can be seen as typical of Wariot Ideal’s understanding of ritual – we have some collective experience and this helps us; on the basis of the analogy, to conceive that we are dealing with a ritual that has Christian, pagan, Asian or maybe Native American elements, yet it never really corresponds to any existing ceremony. The rite is a bit meaningless here, but it is never completely ridiculous. 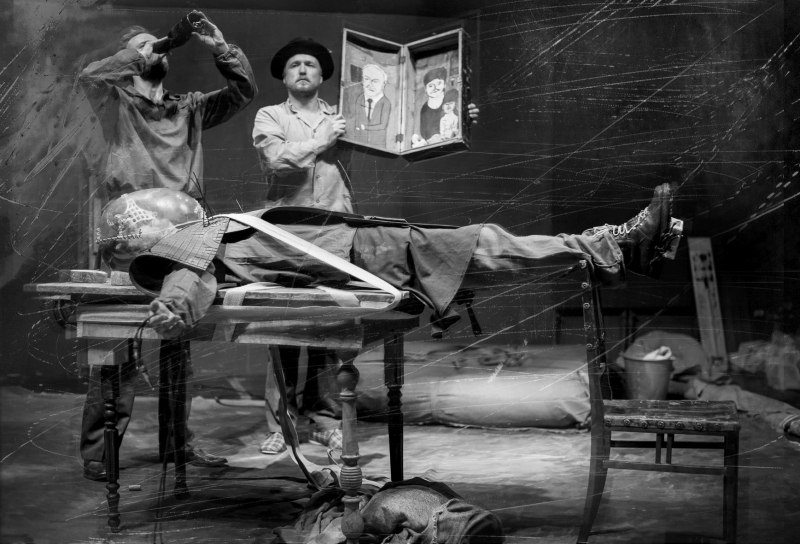