In the famous Buddhist myth of the three wise monkeys, the first one is covering its ears, the second one is covering its mouth, and the third one is covering its eyes (“See no evil, hear no evil, speak no evil”). Less often there is a fourth monkey, Shizaru, either crossing its arms over its belly, or covering its genitalia (“do no evil”). In the Buddhist interpretation of the myth, the monkeys instruct us not to speak ill of others, not to mind the business of others, and not to cause harm to others. In the Western world, they are more often understood as symbols of deception, insincerity, and ignorance, i.e. of turning a blind eye to evil. The producers of The Fourth Monkey see it in a similar way, stating in the theatre bulletin: “Shizaru represents the motto “do no evil”, but this monkey is usually missing from the paintings and statues. Thus, we do not see the evil that we do because, just as the more famous monkeys Mizaru and Kikazaru, we are covering our eyes and ears.”
Only once does a direct reference to the fourth monkey appears in the production by Handa Gote, very discreetly, when Tomáš Procházka sits down for a short while with crossed legs and arms in the typical pose of the monkeys. Thus, it is not clear how the claim, that we do not see the evil we do, is reflected in the production. This is not surprising, as it’s common for Handa Gote not to be explicit or easily understood; her work is accompanied by essayistic texts whose connection to what is happening on stage is usually not evident (and nor can we be certain as to how seriously they are actually meant to be taken). 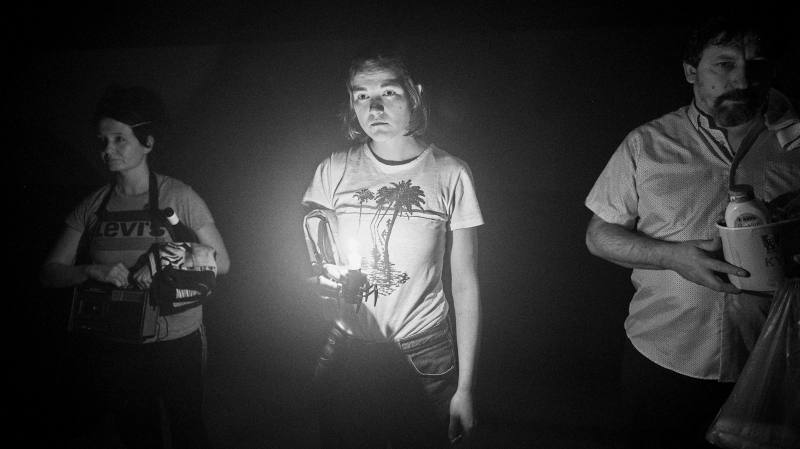 What is clear though, is the fact that the Handa Gote’s ensemble continue their intense explorations of modern civilization; they do so in an original and funny way, but also with a tendency to astonish and an element of hopelessness. With a cheeky glee, they use various pop culture references and banal prefabrications, paradoxically also including a frequently repeated critique of the present state of the world. The people connected to Handa Gote’s ensemble are exceptionally creative in their discoveries of unusual perspectives, focusing on ridiculous, grotesque elements that are not immediately visible, or that are even intended to be overlooked. After all, with a little bit of interpretative creativity, we can see this as the meaning to the above-mentioned claim of covering our eyes and ears to evil.
A direct predecessor of The Fourth Monkey was the production Rain Dance; a ritual play about consumer excesses, very entertaining in its scary ambiguity. While Rain Dance focused on the broader present, the new production offers a grandiose surreal ride through the history of the entire planet Earth. Or, to be more specific, it shows the evolution of life on Earth, from the dinosaurs and prehistoric mankind to IKEA.

scenes from the future present The production begins with a telling scene: Veronika Švábová, Tomáš Procházka, and Anežka Kalivodová slowly walk onto a dark stage, accompanied by the terrifying sound of humming. They are all dressed in everyday casual clothes, which is characteristic of Handa Gote. Kalivodová introduces a small mechanical lunar module that resembles a crab and has a burning candle on its back. She puts the machine down and lets it walk away. All three performers silently concentrate on its slow, strenuous movement, until it suddenly stops; obstructed in its path, it is unable to proceed and so it moves its mechanical legs in vain. The stage gradually lights up and the three performers respectively place on the stage three colorful towels with the images of: a dinosaur, a tiger, and Michael Jackson. (When seen in retrospect, these three images represent three phases in life’s evolution on Earth, but at this point, they only appear to be three cheap kitschy towels.) On top of the towels, they place objects used in daily life, such as the contents of a handbag, credit cards and mobile phones, which are thrown into a heap. This somehow alludes to the preparations for a picnic, as Tomáš Procházka holds up a huge KFC bucket from which he throws a couple of chicken feet/legs onto each towels. There is a slow grave tempo and the action is carried out matter-of-factly, not ceremoniously. The three performers stand in concentration for a moment, then Procházka places the bucket on his forehead as if he wanted to extract a prophesy from it, before he retreats backstage. The women pose as they sit down, evoking Monet’s Breakfast on the Grass. Nothing exceptional has happened so far, so it is difficult to rationally analyze the ‘message’ transmitted, yet it is clear that this is not just a silly joke. The scene has a magical atmosphere, even if it is hard to explain. This, in a nutshell, is the magic of Handa Gote. 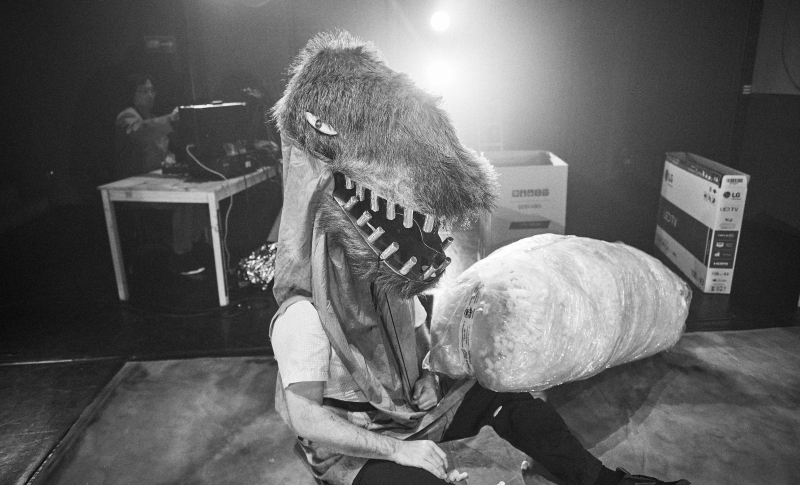 The introduction is an outline of the several blurred thematic threads that are weaved into the production. A long piece of paper is attached to the back wall, visible to the audience, giving them a “timeline” of the unfolding events. Amateurish drawings are gradually sketched on the paper and for these drawings, the performers rather awkwardly use a bread roll, ketchup and mustard, which are retrieved from Procházka’s KFC bucket. A drawing, is always preceded by a ‘prophesy’ in which Procházka holds the bucket up against his forehead and then proceeds to draw a simple circle. He then places a big bone on his forehead and draws a dinosaur, then a comet, a bull (in the style of prehistoric cave paintings), and finishes off with a series of mysterious numbers. Veronika Švábová jots down these numbers, while Anežka Kalivodová is a ‘medium’ who tries to capture unspecified signals via a huge dipole antenna, absurdly attached to her head. In addition to this, a long coaxial cable protruding from her mouth is connected with a 1980s radio-cassette player. The numbers at first form a mysterious series, which is later reduced to a series of ones and zeros.
No further explanations are given; the drawings are open to interpretation, as are all the scenes in the production. Similarly, the ‘level’ of humour is also unclear: seeing the performer stumble around the stage with a two-meter antenna on her head, climbing a ladder in order to find a better signal, is fun to watch in its strange grotesqueness. But, the threatening humming sound in the background provokes the opposite feelings. It can also be seen as a metaphor for the futility of the prophecies: the series of numbers, which were recorded with so much effort, do not make much sense. On top of that, reducing the ‘evolution of the world’ into a simple binary code of ones and zeros is frightening.
However, when looking at this scene from a slightly different perspective, we see that the magic of the production is its ability to combine concentrated seriousness with actions that seem totally absurd. This approach we see not only in The Fourth Monkey, but also in the majority of Handa Gote’s work. 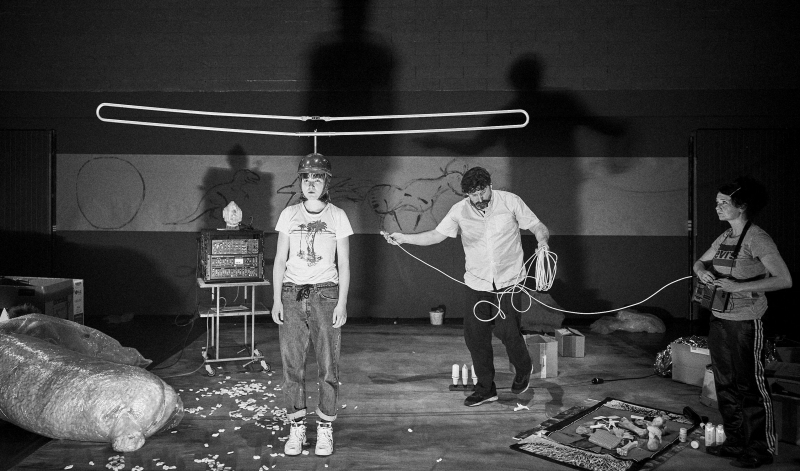